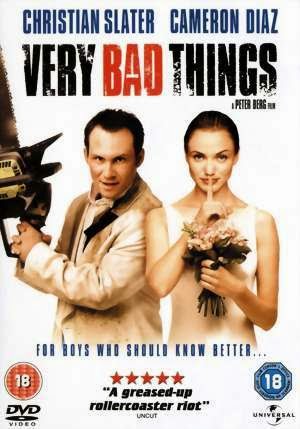 A bachelor party turns into a nightmare when a prostitute is accidentally killed during the festivities. Her death triggers all sorts of unforeseen calamities. (review contains spoilers)

Very Bad Things is a truly twisted black comedy that teeters way over the edge of good taste. It was a very risky move on writer/director Peter Berg's part to make this his first foray into feature films as a director. However, the 1998 film has gone on to become something of a cult classic.

The film centers on a group of friends who throw their buddy Kyle (Jon Favreau) a bachelor
party in Las Vegas. In addition to Kyle, the group includes Mike (Jeremy Piven), his brother Adam (Daniel Stern), Boyd (Christian Slater) and Moore (Leland Orser). The guys are having a blast—boozing, snorting coke and trashing the hotel room—while Mike is having wild sex with a prostitute in the bathroom. In mid-coitus, Mike accidentally slams her head into a towel hook, killing her instantly.

When the others find out what happened, they start to panic and don't know what to do. Adam immediately runs to call the police, but Boyd stops him as he's not so sure if that would be the best course of action considering their situation. The rest of the group agrees with Boyd. They feel that calling the police would bring down an avalanche of problems on their heads and would completely ruin Mike's life. Thus, Boyd suggests that they bury the prostitute in the middle of the desert. He tells them that no one else even knows she was there, as he made the arrangements directly with her. The others think that this would be the best way to handle the situation.

The only one who has any real reservations about the idea is Adam. Boyd and the others eventually convince him that burying the prostitute would be the most practical and expedient thing to do in this predicament and would save them a world of trouble. Right when they're devising the plan of how they'll bring the prostitute’s body to the desert, a hotel security guard enters the room and tells them that there had been complaints about the noise. He soon spots the prostitute’s lifeless body in bathroom. Without hesitation, Boyd stabs him to death with a corkscrew. Now the group has two bodies to bury in the desert.

In Its Attempts To Shock, The Film Becomes Too Far Removed From Reality.

The Vegas incident triggers a chain reaction of mishaps and more grisly deaths. As the film progresses, it grows increasingly more violent and outrageous with the body count steadily climbing. After awhile, it seems that Berg wants to shock viewers more than he wants to entertain them. The first half, while sick, was still funny and entertaining, but the latter half just feels forced, soulless and depressing. It's shocking and sick just for the sake of it with no rhyme or reason behind it. The film becomes so over-the-top and outrageous that it loses any semblance of reality as well as much of its humor.

Each Character Battles With His Conscience.

The film raises some serious moral and ethical questions, and each character is forced to wrestle with his conscience as he comes to terms with his actions. However, there is one person who doesn't appear to be at war with his conscience, and that is Boyd. The incident in Vegas revealed a side of him that his friends never knew. It turns out that he's a bona fide psychopath. And Boyd is not just your everyday, run-of-the-mill psycho. He's a psycho who spouts self-help jargon while chopping up and disposing of dead bodies; he's a psycho who views killing two people and burying them in the middle of the desert as a sign of personal growth for him and his friends and treats it like a male-bonding excursion.

Christian Slater is terrific in the role of Boyd. It's one of his most underrated performances. And it's quite chilling to watch him calmly rationalize each monstrous act he carries out. Even when the film starts to veer off course, his character still remains interesting to watch.

And Daniel Stern and Jeremy Piven are quite good as the bickering brothers Adam and Mike. Both have a number of great scenes. Probably the funniest scene in the entire film is when Adam nearly has a nervous breakdown in the middle of a gas station mini-mart. Overwhelmed with guilt and paranoia, he just about loses it completely. The scene is fraught with tension and dread, but it’s also extremely funny. And Stern displays a great talent for physical comedy in the scene.

One of the best things about the film is its soundtrack. Berg does a tremendous job in choosing the right music to set up scenes. For instance, the scene where the guys are cleaning up the hotel room and cutting up the bodies is set to "Do It, Fluid" by the Blackbyrds. This is a wickedly clever song choice for this scene. And right after that scene, Willie Bobo's "Fried Neck Bones and Some Homefries" is played while the group drives deep into the desert to bury the bodies. The haunting Latin groove fits the scene perfectly.

The film also stars Cameron Diaz as Kyle's controlling bride-to-be Laura. It turns out that she's just as deranged as Boyd. Her obsessive and controlling traits are apparent early on in the film. Even after she learns of what really happened in Las Vegas, she's still adamant about going through with the wedding. She wants to get married at any cost, even if she has to literally kill someone to make it happen. Laura and Boyd are cut from the same cloth. Both are selfish and manipulative control freaks who have homicidal tendencies. Diaz does a solid job as the cold and calculating Laura.

This film is a pretty odd choice for a director making his debut into feature films. But you've got give Berg credit for having the cojones to stick to his vision and not try to tone it down to make it more palatable for mass-audience consumption. This film has some brilliant parts but just as many bad ones, especially the ending. The film's finale is flat-out terrible. It feels as though Berg and everyone else involved had run out of ideas and just hastily threw that scene together. Had the entire film remained as strong as the first half, it would have been a great black comedy.

The reception to the film has been pretty much divided. It's just as much loved as it is reviled.